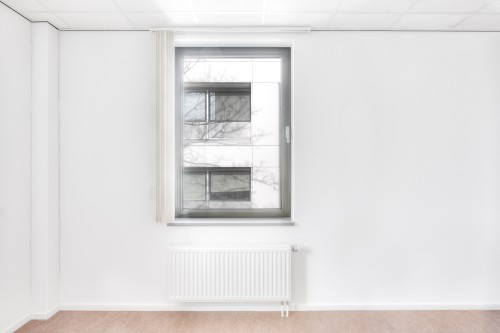 Dutch photographer Aleksander Willemse graduated in 2010 from the Photo Academy in Amsterdam. For his series Room with a View he asks random people he meets during his travels if he can take photographs of the view from their home. Most people are very willing to participate but often don’t realize that the room has to be cleared completely. This sometimesresults in hilarious encounters, with intriguing photographs as a result. In the photographs titled Dutch Views the densely populated way of Dutch living becomes all too apparent in the many window views on brickwalls and neighboring flats. The square windows in these stark empty spaces form a view on the world that reminds us of framed paintings. They resemble the Dutch modernist art by Piet Mondriaan, carefully build up out of squares and lines. However, these images are taken from reality in a process where reality starts to imitate art. Having these views is a reality in The Netherlands, perhaps that is why we love our Modernist painters that much.