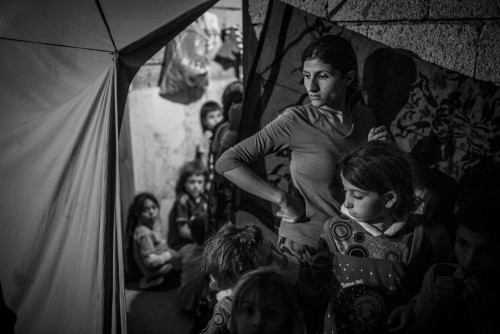 In 2014 ten-thousand Yazidis were surrounded by the IS militia on Mount Sinjar in Kurdistan. For 4 months, they sustained with little food, little ammunition and weapons until the Kurdish Peshmerga, soldiers of Kurdistan, liberated a land corridor and escorted them of the mountain. The Yazidi religion is one of the oldest religions in the world, incorporating many elements from other religions. Since its founding seventy-four genocides have been committed against them. The newest and most systematic is by the Islamic State (IS). Since the invasion of the IS terrorists in Iraq, hundreds of thousands Yazidis have been uprooted and are on the run. Thousands of men and boys have been beheaded and killed; women have been abducted and sold as sex slaves. Most Yazidis live in reinforced concrete skeletons of unfinished houses, improvised tents and on the road. Winter has come to Kurdistan and the refugees have no warm clothes or blankets to protect themselves. In his series 74 German documentary photographer Christian Werner draws attention to the situation and background of the Yazidis. Their current life situation, struggle for survival, the war with all its horrors, but also the systematic destruction of a religion and its people.