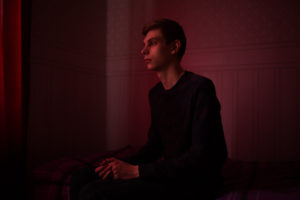 “I am the only son of my parents. If I tell them that I am gay, I will get nothing for myself, but they will be absolutely devastated. All sense of their life… just bang! … it will get rotten.”
From: Days of melancholy, 2014

Tatiana studied documentary photography in St Petersburg in Russia and her work has been published in several noteworthy photography magazines. In her work she is not afraid to address difficult topics under heavy discussion in her home country. Days of Melancholy is a series of portraits that visualizes the lives of gay people in Russia. 74% of the people in Russia said in 2013 that homosexuality is unacceptable in society, of which 16% said gay people should be isolated from society and 5% even says they should be put down. The adoption of the nation-wide law banning “gay propaganda” has driven the gay community underground and in the shadows. Tatiana photographed gay men in the shadows and somber shades, the opposite of the rainbow colored expressions this community is familiar with. Her portraits are intimate and poetic. They depict internal beauty, something she finds more important than the differences that are created by ignorant people.