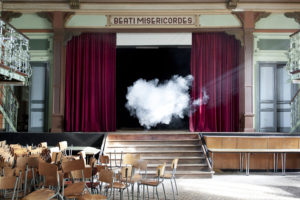 Belgian photographer Robin Vercauteren studied photography at Narafi in Brussels. Her work shows great technical skill and craftsmanship. For the series Nefelibata (pronunciation | ne-fe-IE-‘ba-ta: (n.) lit. “cloudwalker”; one who lives in the clouds of their own imagination or dreams) Robin photographed spaces where she intuitively placed objects to challenge the purpose and preconceived ideas of the space. The use of real objects to redefine space (none of the objects are Photoshoped into the image) and the intricate mix between realism and fiction, creates a dualism that might easily deceive the viewer. But, in Robin’s photographs the viewer is given ample room to create his or her own vision and interpretation on the photographed spaces. Anyone can become a cloudwalker, just follow you imagination.