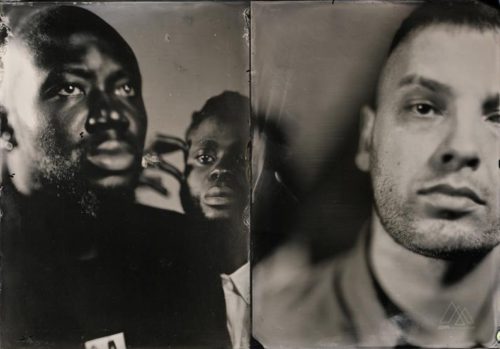 The series Silver Sound consists of images of musicians and bands, created by means of the intricate collodion process. Uivel uses a large-format plate camera and a mobile darkroom, working in his studio and on site at music festivals and other venues. Through these images Uivel offers an insight into the life of musicians: how they prepare themselves for a performance or how tired they are after a show, the exhaustion in their eyes after five months of intensive touring or the pressure they feel right before they go on stage. This series is ever-growing, including portraits of Wolfmother, Sigur Rós, Interpol and Foals, but also lesser known (Dutch) bands are included, such as Indian Askin and Blaudzun. Silver Sound consists of single portraits or group shots of the musicians Uivel likes to listen to, thus creating a kind of visual playlist while using a photographic technique that resembles the fast and unforgiving way of playing live in front of thousands of fans.

The images from the series Silver Sound show us the hands-on way a collodion image is produced, with cracks and tears in the emulsion. This gives the images a lovely personal touch. The shallow depth of field in the images blurs the background and draws all attention to the faces of the artists, hinting at their personal stories.

Matthijs Uivel (1982, NL) graduated from the Royal Academy of Fine Arts in Antwerp, BE, in 2013.
www.atelierjunn.com