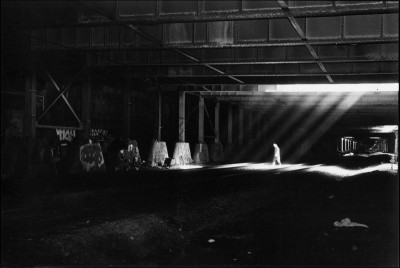 In the tunnel of the Amtrak Rail Road under Riverside Park in Manhattan, some thirty homeless people have taken refuge. The oldest resident has been down for some twenty years, others moved in a few years ago.
Some of the tunnel people live in a concrete bunkers – formerly used by Amtrak maintenance workers as a storage places – others have constructed shelters from wood and plastic. Some of them receive social benefits, most however make a living by recycling cans and bottles or selling books and records they find on the street.
Most have troubled background: Alcohol-and drug abuse, domestic violence, addiction to gambling, military service in Vietnam, mental illness, criminal activities, lack of education and job experince are some of the problems that plague the underground homeless.
Since 1992, trains are running through the tunnel again.
Amtrak wanted the tunnel to be empty by spring 1996. In a coordinatted effort by Amtrak, ths federal govenement and local homeless agencies the tunnel people were couched into alternative housing.
As May 1996, ten forner tunnel people have this way found a new home.

Rays of light coming in the tunnel.