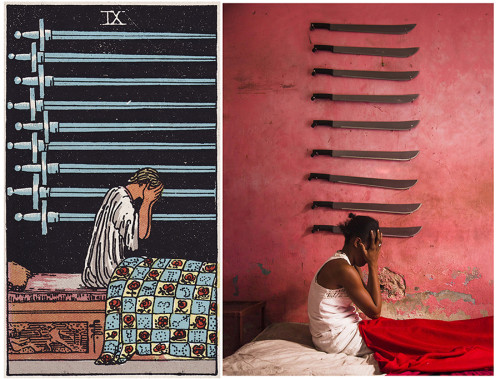 The GhettoTarot is a photographic interpretation of the traditional tarot cards in the ghettos of Haiti. Photographer, filmmaker, journalist and traveler Alice Smeets (Belgium) graduated in 2010 from the London College of Communications. She often travels to Haiti, where she sometimes lives, to document the country and its people. The scenes in GhettoTarot are inspired on the old European Rider Waite Tarot deck (originally designed by artist Pamela Colman Smith in 1909) and are replicated with the help of a group of Haitian artists called Atis Rezistans (resistant artists) in the Haitian slums using only material they were able to find or create locally. The original European drawings are transformed into contemporary images, filled with Haitian culture and meaning. Swords become machetes and the knight of death becomes a voodoo master. With this series Smeets does not try to glorify life in the slums, but she tries to show the Haitian ghetto and its poverty in a different light. It shows that the need for creativity and beauty are part of human survival and a universal aspect of life wherever you live.