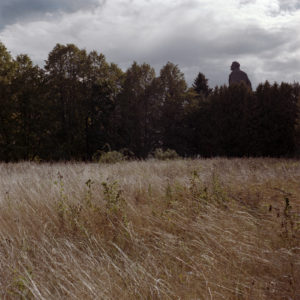 Untitled
From: Museum of your Memory, 2012

German photographer Ulrike Schmitz studied photography in Berlin and her work has been shown in exhibitions throughout Europe. In her work Ulrike tries to visualize and understand historical circumstances as well as the implications these circumstances have on the individual. After the Second World War thousands of German engineers were forcibly relocated to the Stalinist Soviet Union, Ulrike’s family was among them. She went back in search of their memories but instead found her own reality, possessing its own truth and understanding of the past. For her series Museum of your Memory she photographed the town her family was send to (Podberezye) and combined these with film stills from Russian propaganda movies from the Stalinist era. Although the resulting story refers to the past, it remains distinct from it. The images are neither a copy of reality nor evidence of the past but rather an interpretation of Ulrike’s memories and that of her family.