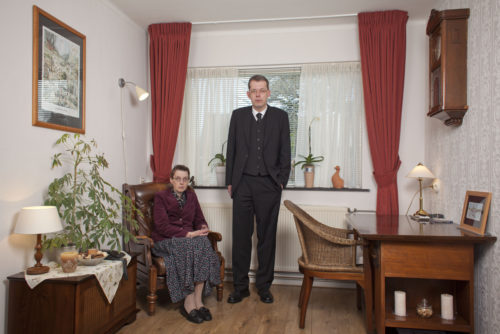 Samuel Otte created the series The Fall – my father, faith and I, guided by the question: how can I make contact with my religious father, who is fighting a religious struggle on his deathbed with the prospect of heaven? In this project Otte researches the meaning of the Protestant Orthodox belief in relation to who his father was, who Otte was to him and who the photographer is now: an apostate secular man. Faith created a division between Otte and his father, because it promises a heaven for believers who live their lives in the right way, but it promises a hell for those who do not believe. Emotional binding, which means truly understanding Otte’s view on life, would shake his father’s faith, something he could not deal with just before his death.

The result of this inquiry by Otte is a biography of a family history through Otte’s great-grandfather, who was a founder of a Reformed Community called De Gereformeerde Gemeenten, his grandfather, his father and himself, who left the Christian faith behind.
Additionally, Otte made three films in which he investigates how he can still connect with his father. Together the book and the three films form a multimedia installation.

Samuel Otte (1980, NL) graduated from the Royal Academy of Arts in The Hague in 2016.
www.samuelotte.nl