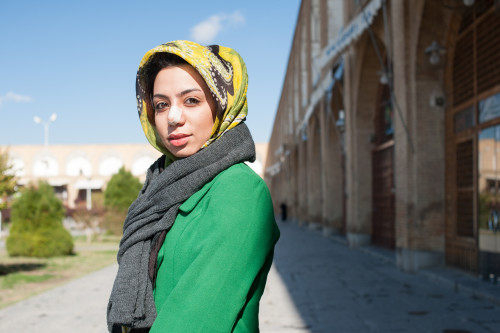 Maryam, Isfahan, 2013
From: Iran: Modern Faces, 2013
Eelkje Colmjon studied photography in Amsterdam and lives in Leiden. She currently works as a freelance photographer and has done commissioned work for several magazines and companies. In her work the human being and what makes us human plays a key role. She travels all over the globe to make intimate portraits of the people she meets. For the series Iran: Modern Faces, she travelled to Iran to photograph young Iranian women who bravely defy Islamic conservative laws by going out in public without veils, showing off their dyed hair and makeup. The nose job bandages have become status symbols and with 200.000 operations a year Iran performs the most aesthetic nose surgeries in the world. With these colorful portraits Eelkje shows how flamboyant and modern the young women of Iran really are, something that is rarely shown in the media.