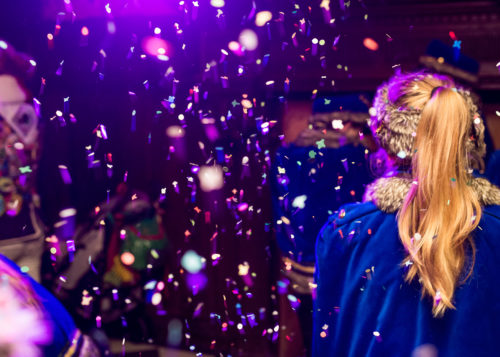 The Dutch carnival is a big dress-up party, where people drink loads of beer to escape everyday life for a brief moment. Traditionally however it was a Catholic celebration of three days preceding Easter. For her research Goossens joined a group of eleven year olds called the “Oeteldonkse Jeugdprinsengroep” for the duration of the festivities to try and find out what the rules, habits and rituals are. These children are taught the rules of carnival in this group to be able to carry them out when they grow up. Goossens’ immersion in the tight schedule of the festivities provided her with little time to contemplate what she wanted to portray, which resulted in a very intuitive way of shooting. In Goossens’ photography, children always have a leading role. These kids intrigue her, because they are original, primitive and uninhibited. Children see something special in small everyday things and fantasize without getting lost. To be part of this group for a few days was a special experience to her, feeling the love and care that was given to these children and the respect for the traditions and the solidarity among them.

Sacha Goossens (1977, NL) graduated from the Fotovakschool in Boxtel in 2016.
www.sachagoossens.com