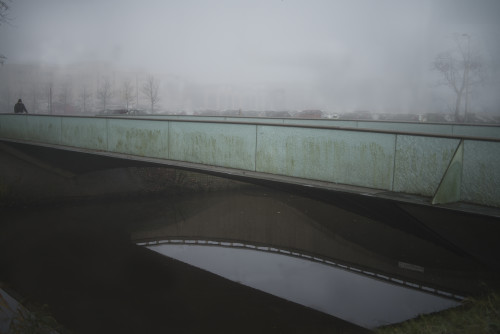 Untitled
From: Streets of Insomnia, 2014

Anne studied media, art and photography and has done commissioned film and photography work for several large companies. In her series Streets of Insomnia she visualizes the many sleepless nights she had after moving to the Chassépark in Breda. During warm summer nights, suffering from insomnia, Anne frequently makes midnight walks through the park to photograph her neighborhood. Deserted streets, dark office buildings, empty playgrounds are sparsely illuminated by streetlights and the early, misty dawn of summer. This creates a dreamlike and surreal atmosphere familiar to those who exhaustingly wander the streets at night. The night seems peaceful and tranquil in Anne’s striking photographs creating an unusual contrast with the harsh reality of bright daylight that is to come.