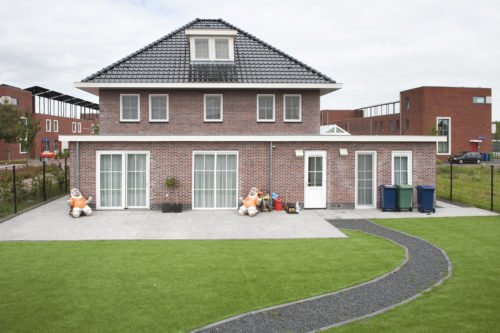 Ko Hage
From Fantasy to Reality, 2015

From Fantasy to Reality features the Dutch city of Almere, one of the largest cities in the Netherlands. In the 1970s Almere literally emerged from the bottom of the sea, being part of a new province of the Netherlands. Because the city is built from scratch, it did not have to deal with history: it has no canal houses, stepped façades, or old churches well-known from historic Dutch city centers such as Amsterdam. Starting with a clean slate, it could therefore be designed and built as an ideal city, or Utopia. Now, forty years later, Dutch photographer Ko Hage reflects on the city of Almere as a place that had been an unknown area of the Netherlands for him, as it is for many Dutch people – a so-called terra incognita. Hage wanders around all the different areas of this widespread city (over 250 square kilometers) to capture the things which surprise and amaze him. He strolls around streets with great names, such as ‘Fantasy’, ‘Reality’, and ‘Simplicity’, almost resembling poetry. He roams through different neighborhoods built in different styles and decades over the last forty years, as if traveling through time by a time machine. The difference in construction periods is clearly visible in the urban planning designs and architecture of the city, expressing the Dutch zeitgeist as nowhere else in the Netherlands, almost as an open air museum depicting the illusion of feasibility.

Ko Hage (1972, NL) graduated from the Fotoacademie in Amsterdam in 2015 and currently lives and works in Nijmegen.
www.kohage.nl