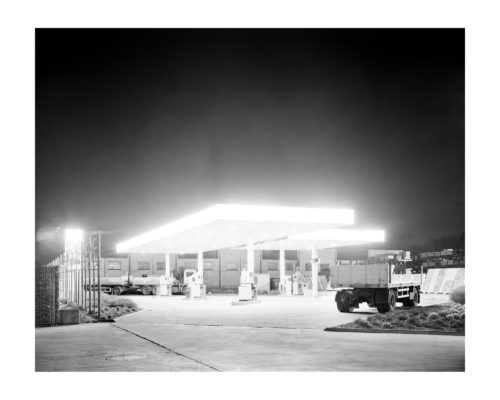 Bastiaan van Aarle’s series UN-TITLED is about the dominant role of advertisement in public space. Slogans illuminate our streets both day and night, and light boxes force their images on us. Our daily environment is saturated with messages, with meaning. Photography plays a big role in this phenomenon. The photographic image is often packed with meaning and reality fades and becomes unbelievable in contrast to these images.

A photographic material absorbs light which creates a chemical reaction. Van Aarle employs this principle in the series UN-TITLED to absorb “commercial” light, thereby reflecting on the medium of photography itself. This way he destroys the message of the advertisement, because his process turns the neon signs into a white emptiness that the viewer can fill in himself. For Van Aarle, photography is not a way to create images that are saturated with meaning, but a medium to create “emptiness” in photographs. He researches how light can be used as a means of communication in several ways. Van Aarle gives his view on the identity of the photographic image in our current image-filled environment. The images from UN-TITLED show parking lots, gas stations and other buildings with very radiant white fields as the centre of attention. The images are monochrome, making the white spaces stand out even more. The presence of the white spaces is ambivalent: it is no longer obvious why they are there and what their purpose is.