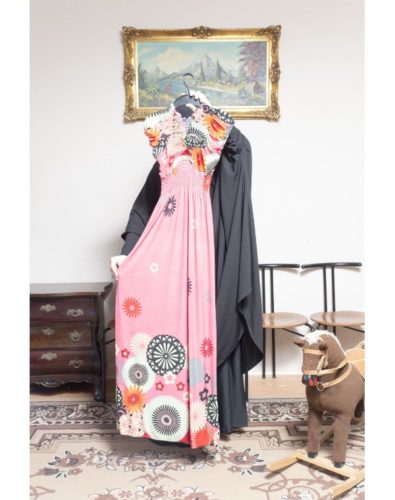 With her photo series ‘Veiled’ Saskia Aukema was unanimously named the winner of the International Photo Festival Leiden 2018. Aukema photographed niqab-wearers for almost three years in both The Netherlands and England. The photographer won the trust of the women and asked them about their reasons for wearing a niqab. She then photographed them with both their niqabs as well as the clothes the portrayed women like to wear at home. Our jury praised Saskia Aukema for the nuanced way in which she addressed the niqab-discussion by using both her talent and photographic skills. With the next edition of IPFL around the corner, we contacted Aukema and asked her what winning IPFL 2018 meant for her career as a photographer.

What made you decide to submit your work to the International Photo Festival Leiden?
I had already visited two earlier editions of the International Photo Festival Leiden and was charmed by its small scale and picturesque environment. A long time ago I used to study in Leiden, so I also have a connection with the city. Back in 2017, I tried to seize every opportunity to tell the story of ‘Veiled’ to the public. I believed that it was important to share the story about niqab-wearing women with the world. In fact, the story is unabatedly topical because of the niqab ban that was introduced in August (in the Netherlands).

How did you experience your participation in the International Photo Festival Leiden 2018?
It was cosy and there was a good atmosphere; also between the participating photographers. I was impressed by the volunteers who worked very hard for months to create something beautiful. A feel-good atmosphere surrounded the festival. The fact that all my work was shown at Photoville in New York was the icing on the cake. Without IPFL I wouldn’t easily have made it to such a festival.

What went through your mind when you heard that you had won IPFL 2018?
I honestly did not expect that I would win but was very happy. ‘Veiled’ was a challenging project to create with a lot of obstacles and hard work along the way. Besides, the project was very dear to me. It’s an enormous boost when a professional jury confirms that you’re on the right path. I was also glad for the women with whom I had worked on the project. By winning IPFL 2018, I felt like I could give them something in return for the trust they had given me by allowing me to portray them. I was happy that their story was seen and heard by the jury.

What did winning IPFL 2018 mean for your professional career as a photographer?
It doesn’t go unnoticed: such a price (or nomination) makes organizations that you want to work with more confident in contacting you. I’m still in touch with some people that I met during the festival. That is enriching; also in a non-professional way.

What projects are you currently working on?
The two projects that I’m currently working on, are not yet ready to be shared. But a big project that I finished this spring was ‘En het water was een muur’ (‘And the water was a wall’, www.enhetwaterwaseenmuur.nl). The project was commissioned by Stadsarchief Amsterdam and carried out by me and Richard Bank. It’s about the Jewish Eroev of Amsterdam; an exciting phenomenon of which most of Amsterdam’s inhabitants are not aware. It felt like we were allowed to go on a treasure hunt for almost a year. At the same time, I have still been following the developments surrounding the niqab. Since the niqab-ban was introduced, several unpleasant incidents have taken place. The niqab-wearers start to speak out more and more.

Do you have any advice for recently graduated photographers and participants of IPFL 2020?
A good text, with neither too much nor too little information, can have a great impact on your photographic series. Don’t hesitate to ask for help when you’re struggling with writing one. Also: just submit your work. The Leiden Photo Festival is fun!

—-
Check out Saskia Aukema’s work on her website: www.saskia-aukema.nl
The book ‘Unveiled’ can be ordered here: https://lecturis.nl/product/veiled/.
From 1 October 2019 until the end of the year Aukema’s work is on view at Argan, Amsterdam: https://argan.nl/.