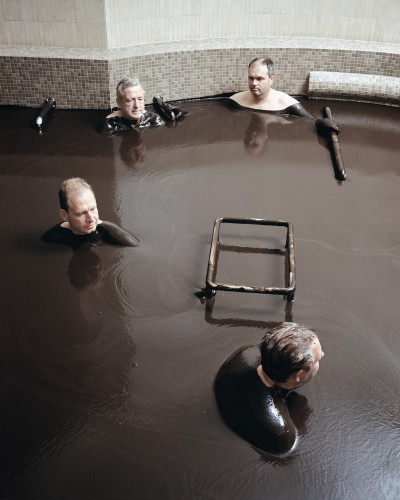 Germany has over 300 spa towns. For Germans going to a retreat for health reasons or for leisure is a way of life. Many towns have specialized rehabilitation clinics and treatments for chronic diseases such as asthma or rheumatism. Some have added wellness programs to their repertoire. Alexander Krack, who graduated from Ostkreuzschule in Berlin in 2014, travelled to 40 of these towns to create the series The Treatment (in German: morgens nüchtern, am Brunnen, zu Bett). He wondered whether these places have a unifying aesthetic and whether this aesthetic transcends the mere facade and structure of the created environment. He looks at each new town like an explorer of new territories, trying to capture the microcosm. Sometimes from a more distanced perspective when shooting the scenery, other times more closely talking to the temporary inhabitants and portraying them in their daily routines and treatments. This resulted in wondrous photographs that look more like fantasy then real life. Maybe that is the reason why these spa towns are so popular: they give the people who need it a chance to escape reality for a while, they create the illusion of a dream where one can never be sure if things are really the way they seem.