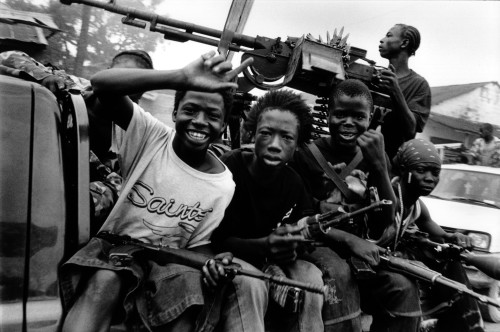 © Teun Voeten, Ganta, Liberia, June 23rd 2003. Ganta is a small town, 250kilometers NE of Monrovia, on the border with Guinnée. Rebels from the LURD (Liberians United for Reconciliation and Democracy) captured the town but were beaten back by President Taylor’s goverment forces. During fierce fighting, the LURD rebels, who have their bases in Guinnée, relentlessly shelled the town. Excited members of government armed forces/militias in a pick up truck. In the back a piece of anti-aircraft gun.